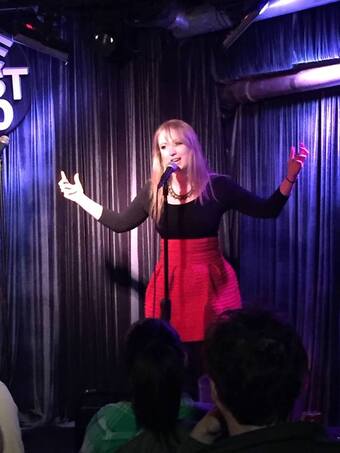 Thanks for stopping by my humble abode. Curious as to what I been I've been up to? You've come to the right place!

News
Lauren spent an incredible summer performing in Don't Tell Mama's Next Big Act and was voted into the Top 5 for best cabaret sets. Check out her media page to see some of her performances!

Next up, she will be appearing as Rosa Bud in Rupert Holmes' The Mystery of Edwin Drood with the Blue Hill Troupe from Nov. 8 - Nov.16 in NYC. Check out www.bht.org for ticket information. Rupert will be facilitating a talk back after the Saturday Nov. 9 performance, so be sure to snag a ticket if you happen to like pina coladas and getting caught in the rain.

About
Lauren currently resides in NYC, where she fancies herself an actress and cabaret artist, cocktail connoisseur, and armchair comedian. In reality, she is more frequently a temp, a bartender, and a master of the world's most cringeworthy dad jokes.
​
She received her Equity card as the Narrator in the Media Theatre's production of Joseph and the Amazing Technicolor Dreamcoat, where she also appeared as Wednesday in The Addams Family and Cosette in Les Mis. Friends told Lauren she would be receiving a rainbow colored Merkin for joining Equity. She has been waiting by her mailbox patiently for years, refusing to believe it was a lie.

Lauren is also a voiceover artist specializing in eLearning, tag lines, and princess voices. She has worked with such clients as Better Help, Disney on Ice, Wisdom Destinations and Speakly Language App. She has a home studio and audio editing capacity, so feel free to reach out for any of your VO needs.

Fun Facts
1) Lauren may still be a member of the Butcher's Union from when she worked in a deli as a teenager.
2) Lauren was projectile peed on as a child by a lion named Numar at the Cape May Zoo in New Jersey.
3) Lauren's favorite Disney characters are Zazu the Hornbill and Ichabod Crane.